“We’ve almost completed our excavation. The chamber was located precisely where your plans indicated, though I must admit that it was somewhat larger than we initially anticipated. Our original plan to drag it simply isn’t going to fly, instead I’ve commissioned the workshop at Thonis to construct an appropriately-sized wagon. I estimate you’ll have your hands on the goods before the next new moon.”

Letter to Ranno of the Merchant’s Guild

We find ourselves here, a hair’s breadth before Christmas, with the penultimate update of the year. It’s a more substantial update than usual, with a plethora of new content. Nothing is explicitly seasonal, though we’ve clearly decided to deliver these elements now due to the logical connection with all things chilly.

Firstly we’ve added the Minoan race to the game. Currently you’ll meet only one, though there will soon be many more as members of the influential Merchant’s Guild. This is the first interaction you’ll have with the secretive group, but it won’t be the last…

Bringing home the seasonal theme this December is our new Extreme Exotic NPC, the Ancient Dragon. She has only now awoken from her ancient rest, this update marks the start of her interest in what has become of Sabu. For now you can enjoy her feminine side, though there will be more scenes with her in the near future. This is only the beginning of her story and of uncovering other beings lost beneath the dunes.

The Frost-Forged weapons are also now available to craft as well. For now they don’t have status effects, though we will add these once we reach the next milestone with the combat and inventory systems.

A veritable blizzard of minor changes have arrived as well, including new SFX, tonnes of voice acting, improvements to monsters, and more. Check out the full patch notes below.

We want to thank each and every patron for your incredible support. Without you we wouldn’t have been able to reach this pace of development. We’ve come so far in the last year and we’re really looking forward to getting our teeth into the main story. 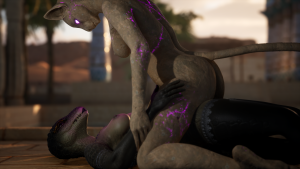 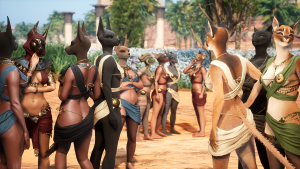 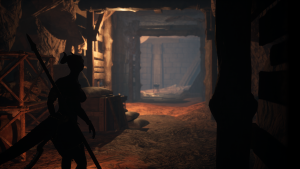